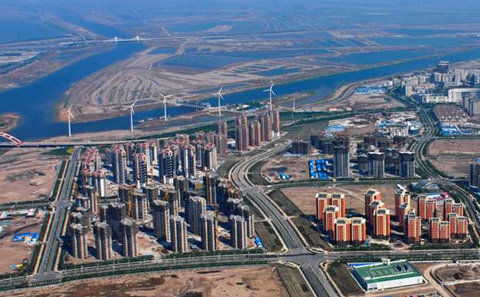 Although Tianjin has been feted as a model eco-city, its over reliance on new technology and local government power blocs puts its sustainability into question. Environmental degradation in China has now become so severe that it is no longer just an issue threatening public health but also poses a challenge to urban social stability. There are more than 200 eco-city projects in China today, such as this one in the city of Tianjin in northern China.

Eco-cities need to be based around communities, not technology

China’s political leaders are only too aware of the need to tackle the problem. Over the past few years, the enduring legacy of Deng Xiaoping’s ‘growth-first’ philosophy has been overhauled and imbued with ‘shades of green’ as the state rolls forward various ‘green civilisation’ campaigns nationwide. In tandem with this, flagship ecological city projects have been hailed as the concrete manifestation of China’s commitment to improving its dismal environmental track record.

With much fanfare, the Chinese Academy of Social Science (CASS) recently launched the 2013 Ecological City Green Book. While acknowledging several teething problems with eco-city construction projects in China, the Green Book is an affirmation of the country’s faith in the mobilisation of technological solutions to tackle urban environmental problems.

By some recent estimates, the number of eco city projects in China has swelled to well over 200 cases with more than 80% of prefecture level cities having at least one eco-city project according to a recent report published by the China Society for Urban Studies. Not surprisingly, most of the large scale eco-city projects have been launched in key coastal cities and places that are undergoing rapid economic development. Significantly, the four provinces which do not have any plans for eco-cities (Tibet, Gansu, Qinghai and Ningxia) are amongst the poorest, located in the western part of the country.

Many of these projects claim to emulate international ‘best practices’ of ‘ecologically advanced’ cities elsewhere and are assembled through a transnational network of urban consultants and green energy experts, as exemplified in the flagship eco-city project in the northern city of Tianjin, China’s fourth largest city.

Eco-cities in China: The “Singapore transfer”

As a joint venture between Keppel Group and a Chinese consortium led by Tianjin TEDA Investment Holding, the 34.2 km square Sino-Singapore Tianjin Eco-city (SSTE) is the result of a collaborative agreement between China and Singapore to jointly develop a socially harmonious, environmentally friendly and resource-conserving city in China.

The SSTE is ostensibly an economic venture that aims to build a prototype city that can be replicated in other cities in China. It’s key eco-features are mostly the products of advanced environmental technologies, such as good thermal insulation for buildings and use of solar energy to reduce energy consumption, rain water collection for irrigation and extensive landscaping features such as sky gardens.

The SSTE and scores of other eco-flagship projects sprouting up all over China, have a number of features in common. First, these projects often involve mobilising an internationalised network of policy experts, professional planners, architects, engineers, etc. who engage in technical ‘knowledge transfers’. In addition, these projects are also driven strongly by entrepreneurial/commercial objectives and ideals of ecological modernisation. The latter is increasingly seen as a catalyst to even greater growth especially when focusing on creating new environmental technologies (for example, green buildings and clean energy).

But the development of high profile flagship projects is not without problems. It brings into question whether the pursuit of urban sustainability and eco-city is simply a legitimisation strategy for pro-growth entrepreneurial cities. Moreover, with the lack of meaningful grassroots participation, the general consensus has been that this is a project largely driven by a strategy of place marketing.

China and the World Discuss the Environment

There is also an over-reliance and celebration of the use of technology in eco-city developments. This needs to be more circumspect and to look more into appropriate technology that is in sync with the needs of the local community.