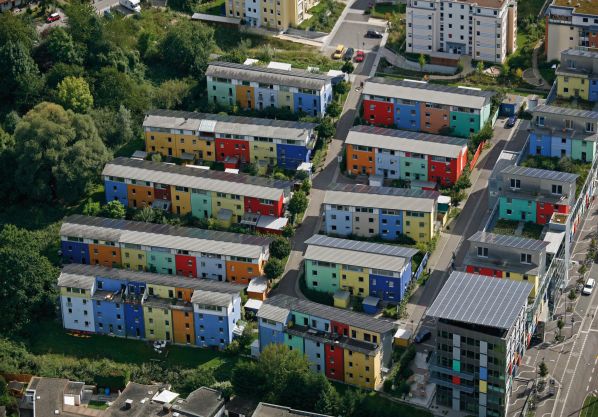 China and Germany falling behind on green building targets

More investment is needed in both China and Germany to improve the energy efficiency of the built environment. China and Germany have both set themselves ambitious environmental targets: China aims to reduce its carbon intensity by 40-45% in 2020 compared to 2005. And Germany intends to reduce its greenhouse gas emissions by 40% (in 2020), 55% (in 2030), 70% (in 2040) and 80-95% (in 2050) compared to 1990. Furthermore, Germany has recently decided to conduct the so-called Energiewende, an energy turnaround with a phase out plan for nuclear power plants. For both countries, these targets present great challenges.

Improvements in the building sector’s energy performance would not only have positive effects on energy savings, and climate change mitigation efforts, but also enhance energy security, employment and boost innovation.

The characteristics of the building sector in both countries are quite different. China has both a huge existing building stock (48.6bn m2 in 2010) and a rapid growth in new buildings (1.7bn m2 added each year between 2000 and 2010, which is more than the annual total of new buildings of all developed countries), and faces thus a dual challenge.

In Germany, the growth rate of new buildings is much lower and regulations for new buildings are already quite strict and hence its main focus needs to be on existing buildings. Of Germany’s current building stock, 75% has been built before 1979 when the first thermal insulation regulation came into force. Furthermore, the geographical situation differs, with China having four different climate zones and Germany only one. These need to be reflected in their building policies, since the technical challenges for more efficient buildings in cold or humid temperatures are different.

Both countries have implemented labelling systems for greener/more energy efficient buildings, which surpass the mandatory requirements of the building codes. While the one- to three-star labelling system in China applies only to new buildings, the German development bank’s (KfW) building standards apply to both new and existing buildings.

If one considers the size of China’s overall building stock and Germany’s large stock of existing buildings in need of retrofitting, it becomes evident that this will require large amounts of investments in both countries. Thus the question occurs, how can the government financially support improvements in energy efficiency of buildings and also incentivise the private sector to invest in this area? The general approaches taken differ quite significantly between the two countries.

Financial support for energy efficiency in buildings in China is characterised by a government-driven, top-down and one-off manner. It is provided mainly in form of grants and channelled from the central government to the local government, who then distributes it further – with potentially additional financial resources – to building and project developers and investors.

Currently, there are also discussions whether house buyers should be able to receive financial support in order to provide them with incentives for buying more energy efficient buildings. For new buildings, financial support is attached to the one-to three-star labelling system. A project developer can receive 45RMB/m2 for a two-star building or 80RMB/m2 for a three-star building respectively as grants. For green ecological cities particularly focusing on the scaling up of green building development, a funding scheme with a benchmark subsidy of 50 million RMB per city has been offered by the central government.

Furthermore, there are different tax incentives for instance for material producers for energy efficient buildings. Funding is also provided for retrofitting measures in the northern regions. In the severe cold and the cold zone, project developers can receive grants of 55RMB/m2 or 45RMB/m2 respectively for retrofitting buildings. In addition to the financial support provided by the central government, some regional governments are also providing financial support. However, the volume of such support differs between the different regions, depending on their awareness and financial capacities.

Via the “Green Credit Policy”, which has been issued by Ministry of Environmental Protection (MEP), the People’s Bank of China (PBC) and the China Banking Regulatory Commission (CBRC), private investment shall be guided towards environmentally friendly projects and be restricted from energy intensive or highly polluting projects. However, the current practices are still quite limited in terms of the number of participating banks, the size of their financial investments and their added value. This is due to many reasons including insufficient and short-lived policy signals to support the private sector in implementing green credits, a lack of established instruments to assess and control credit risk, as well as inadequate information to understand the needs of and the long-term benefits for the building industry.

The main instrument used for new buildings and for retrofitting measures of existing buildings are concessional loans, and in some cases specific types of grants, such as repayment grants or investment grants. Further support is available in the form of grants from the Federal Office of Economics and Export Control (BAFA) as part of the so called “Market incentive programme for promotion of the use of renewable energies” available for measures related to renewable energy installations in buildings. Income tax reductions for those who retrofit their buildings are currently under discussion but no decision has yet been taken in this regard.

Both countries already apply a broad range of instruments and provide large volumes of funding for supporting energy efficiency in buildings. Nevertheless, accelerated actions are needed, and so are more financial resources. For instance in Germany the renovation rate of buildings is still behind where it should be (2% per annum) in order to achieve the intended targets. And also in China, there are gaps regarding implementation of the building codes, heating system improvement in northern regions, and green building development pace and quality, etc.