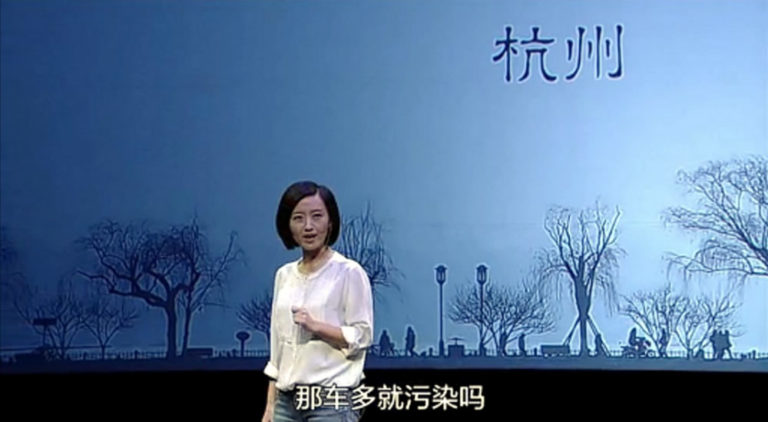 China Smog Documentary – Under the Dome

Documentary by former CCTV anchor about impact of Beijing’s smog on her child gets hundreds of millions of clicks in just a few days after going online. After her unborn daughter was diagnosed with a tumor, former CCTV reporter Chai Jing quit her job and self-funded a one million yuan (US$160,000) documentary on China’s smog. ‘Under the Dome’ took a year to make, and since its release has become an online sensation.

On March 1, 2015 Minister for Environmental Protection Chen Jining – only in the job for 48 hours – said that Chai was to be admired for using the public health angle to encourage citizens to be concerned for the environment.

The 103-minute documentary was released on February 28, receiving 75 million clicks the same day on Chinese video streaming sites such as Youku. Two days later it had been played over 200 million times, a new record for a serious long-format video. By way of comparison, the second season of popular US political drama ‘House of Cards’ got about 20 million clicks in its first week when broadcast in China.

In 2013 Chai’s unborn daughter was found to have a tumor. Thankfully it was not malignant and treatment after the birth was successful, and Chai quit work last year to look after her daughter.

Chai was formerly one of CCTV’s most highly-regarded investigative reporters. In 2013 a memoir of her ten years at the station became one of the year’s best-sellers. The royalties from that book funded her documentary.

As Beijing’s smog became more intense, Chai’s anger increased as she found it found it more difficult to have a normal life with her newborn daughter.

“(Smog) casts a shadow over our entire lives.” she says. Beijing experienced 175 smoggy days during 2014, and “for half the year I had to keep her locked up like a prisoner.”

“In the morning I’ll sometimes find her standing at the window pressing her hand to the glass, showing me she wants to go out.”

The documentary’s title is a reference to a US science fiction novel and TV series of the same name. In the novel, written by bestselling author Stephen King, an invisible and mysterious force field descends upon a small fictional town, trapping residents inside and cutting them off from the rest of civilisation.

Chai decided to investigate the problem of China’s chronic air pollution in what she terms her “private grudge with the smog.” Chai explained that “everything I did was so I could answer the questions she’ll ask: what is smog? Where does it come from? What can we do about it?”

To find the answers to those three questions, Chai visited polluted sites all over China. She also visited Los Angeles and London to find answers on how foreign cities had dealt with air pollution.

‘Under the Dome’ explains what smog is, the harm it does, how it is formed and the problems in dealing with it, as well as what individuals can do. Chai said that smog is largely an energy problem – 60% of China’s air pollution comes from burning coal and oil, and in 2013 China burned more coal than all other nations combined. She also shines a light on the management and system failures that are the reasons behind smog.

In an interview with People.com.cn, Chai said that in the past her reports on smog had been factual, reporting on polluting companies or local governments in pursuit of economic growth. And she herself was unsure: do we want to grow, or protect the environment?

But this year of investigation has led her to feel that there is no conflict between the two. Air pollution isn’t the outcome of reform and opening up, and in fact fuller market reforms are needed to solve it.

Nor is environmental protection a burden, in Chai’s view.  For her, greener laws are a source of innovation that will promote competitiveness, employment and growth. Overseas experiences are used to back her view.

In Chai’s narrative, the problem of smog can be solved if government reduces unnecessary intervention and allows markets to be the primary allocator of resources.  The role of government is essential to set policy and enforce laws, the former news anchor says, but so is a fair and competitive market to help spur innovative solutions to pollution. Both these are in line with the current direction of reform in China, she says.

Chai has sent the material she gathered during filming to the committee drafting a revision of China’s air pollution law, in the hope it will be of some use. She also got a response when she sent the same materials to the group working on plans for reform of China’s oil and gas sector.

The Sina columnist Entertainment Capitalism praised Chai’s media savvy in winning attention in the run up to annual meetings of China’s Communist Party top brass in March, which are known in Chinese as ‘Lianghui’.

Well-known Phoenix TV commentator Cao Jingxing tweeted “Thank you, Chai Jing, every committee member, representative and official at the Lianghui should watch this.”

But Chai’s film has also drawn criticism from those who say it is unscientific to blame her daughter’s illness on smog, and that the use of her daughter has made the investigation less objective.

Chai’s former colleague and CCTV anchor Cui Yongyuan told media that Chai would likely have to run the gauntlet of pedantic questions and online abuse. A year ago, he put out his own self-funded investigative documentary querying the safety of genetically-engineered food, ‘The Gene Report’, the findings of which were rebutted by government officials.

Cui adds that the two films would, deliberately or otherwise, affect vested interests. He adds: “If (officials or companies) lose face, and if they lose money or an official promotion, they will attack you.”

The sensation caused by Chai’s film has taken Chinese commentators by surprise. Li Jiangtao, a senior scholar at Tsinghua University’s Institute of Economics, says in his blog that three factors had combined to make the documentary interesting to viewers: a big event (China’s smog), a strong human angle involving a well-known TV anchor, and growing concerns about the environment.

Li adds that the timing of the documentary is particularly interesting. The Communist Party-led congress that starts this week, the appointment of Chen Jining, and the Chinese leadership’s widening anti-corruption campaign.

Chen has said that watching the film reminded him of the global concern for the environment  that Rachel Carson’s 1962 book ‘Silent Spring’ created, and that Chai’s documentary was of particular significance for raising public interest in the environment and the health problems pollution can cause.

He added said that his ministry and the media are on the same side, and that ‘Under the Dome’ demonstrates an interaction between the government, society and the media.

The impact of the documentary has even resonated strongly with China’s stock markets, where shares in companies that make anti-pollution equipment soared on Monday, prompting equities in some environmental technology companies to soar beyond their trading limits.