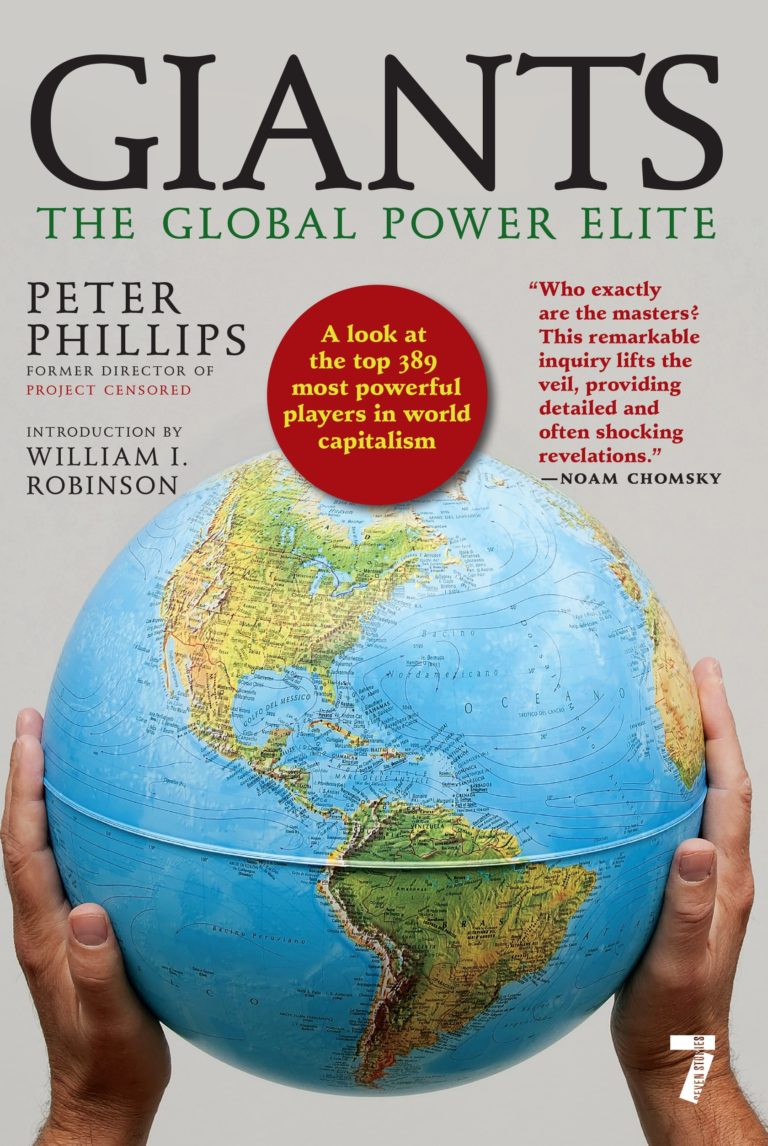 A look at the top 200 most powerful players in world capitalism, who are at the controls of our economic future. Who holds the purse strings to the majority of the world’s wealth? There is a new global elite at the controls of our economic future, and here former Project Censored director and media monitoring sociologist Peter Phillips unveils for the general reader just who these players are. The book includes such power players as Mark Zuckerberg, Bill Gates, Jeff Bezos, Jamie Dimon, and Warren Buffett.
As the number of men with as much wealth as half the world fell from sixty-two to just eight between January 2016 and January 2017, according to Oxfam International, fewer than 200 super-connected asset managers at only 17 asset management firms–each with well over a trillion dollars in assets under management–now represent the financial core of the world’s transnational capitalist class. Members of the global power elite are the management–the facilitors–of world capitalism, the firewall protecting the capital investment, growth, and debt collection that keeps the status quo from changing. Each chapter in Giants identifies by name the members of this international club of multi-millionaires, their 17 global financial companies–and including ngos such as the Group of Thirty and the Trilateral Commission–and their transnational military protectors, so the reader, for the first time anywhere, can identify who consitutes this network of influence, where the wealth is concentrated, how it suppresses social movements, and how it can be redistributed for maximum systemic change.

PETER PHILLIPS has been a professor of political sociology at Sonoma State University since 1994, was the director of Project Censored from 1996 to 2010, and the president of Media Freedom Foundation from 2003 to 2017.  He has been editor or co-editor of fourteen editions of Censored, co-editor with Dennis Loo of Impeach the President: The Case Against Bush and Cheney (Seven Stories Press, 2006), and editor of two editions of Progressive Guide to Alternative Media and Activism (Seven Stories Press, 1999 and 2004). He was a co-host of the weekly Project Censored show on Pacifica Radio with Mickey Huff from 2010 to 2017, originating from KPFA in Berkeley and airing on forty stations nationwide. He teaches courses in Political Sociology, Sociology of Power, Sociology of Media, Sociology of Conspiracies, and Investigative Sociology. He was winner of the Firecracker Alternative Book Award for Best Political Book in 1997, the PEN Censorship Award in 2008, the Dallas Smythe Award from the Union for Democratic Communications in 2009, and the Pillar Human Rights Award from the National Association of Whistleblowers in 2014. He lives in a redwood forest near Bodega, California, with his wife, Mary Lia.

Who exactly are the masters? This remarkable inquiry lifts the veil, providing detailed and often shocking revelations – Noam Chomsky

A look at the top 300 most powerful players in world capitalism, who are at the controls of our economic future

“Adam Smith warned that the “masters of mankind” will pursue their “vile maxim: All for ourselves, and nothing for other people.” There could hardly be a more apt description of the recent era of savage capitalism, straining for new heights under cover of Trump’s antics. Who exactly are the masters? This remarkable inquiry lifts the veil, providing detailed and often shocking revelations about the astonishing concentration of private wealth and corporate power, its institutions and integrated structure—and not least, its threat to civilized and humane existence.” – Noam Chomsky

“Peter Phillips’ book is a timely reminder that as the transnational capitalist class/global power elite changes it is vital that critical researchers keep up with these changes. The reader will find impressive documentation of the institutions and personnel driving capitalist globalization in its destructive and relentless search for growth and profits.” – Leslie Sklair, Emeritus Professor of Sociology London School of Economics and Political Science

“Giants answers, in great detail, the commonly-asked but little-known question: who really pulls the strings? This book outlines the handful of individuals who manage the most powerful think tanks, investment firms and corporate boards who make society’s decisions at the expense of the planet. . . . Giants is an essential tool to understand those at the reigns of empire and capitalist hegemony, so we can be empowered to fight for our survival.”” – Abby Martin, The Empire Files

“For anyone who wants to know precisely where we are today, and why—and who knows that we can and must go somewhere else—Giants is a book to read, and recommend, right now.” – Mark Crispin Miller PhD, Professor of Media Studies, New York University

“It’s quite possible our future as a species on the planet rests in large part on how well we understand the ambitions and networks of the global power elites Phillips exposes in Giants, and whether we mobilize and act to confront them.” – Mickey Huff, president, Media Freedom Foundation and director, Project Censored; professor of social science and history, Diablo Valley College

Central to the idea of a globalized power elite is the concept of a transnational capitalist class theorized in academic literature for some 20 years. Giants reviews the transition from nation state power elites, as described by Mills, to a transnational power elite centralized on the control of global capital around the world. The global power elite function as a non-governmental network of similarly educated, wealthy people with common interests of managing, and protecting concentrated global wealth and insuring its continued growth. Global power elites influence and use international institutions controlled by governmental authorities like the World Bank, International Monetary Fund (IMF), North Atlantic Treaty Organization (NATO), World Trade Association (WTO), G-7, G-20, and others. These world governmental institutions receive instructions, and recommendations for policy actions from networks of non-governmental global power elite organizations and associations.

The global 1% comprise over 36 million millionaires, and 2,400 billionaires who employ their excess capital with investment management firms like BlackRock and J.P Morgan Chase. The top 17 of these trillion-dollar investment management firms—which I call the Giants— controlled $41.1 trillion dollars in 2017. These firms are all directly invested in each other and managed by only 199 people who are the decision makers on how and where global capital will be invested. Their biggest problem is they have more capital than there are safe investment opportunities, which leads to risky speculative investments, increased war spending, and the privatization of the public commons.

The global power elite are self-aware of their existence as a numerical minority in the vast sea of impoverished humanity. Roughly 80% of the world’s population lives on less than ten dollars a day and half live on less than three dollars a day.

This concentration of protected wealth leads to a crisis of humanity, whereby poverty, war, starvation, mass alienation, media propaganda, and environmental devastation are reaching levels that threaten our species’ future. Organizing resistance and challenging the global power elite should be foremost on the agendas of democracy movements everywhere, now and in the near future. Addressing top-down economic controls, monopolistic power, and the specifics of the global power elites’ activities will require challenging mobilizations and social movements worldwide.

The act of identifying the global power elite by name may persuade some of them to recognize their own humanity and take corrective action to save the world. Global power elites are probably the only ones capable of correcting this crisis without major civil unrest, war, and chaos. Giants is an effort to bring a consciousness of the importance of systemic change and redistribution of wealth to the 99%, and to global power elites themselves, in the hope that we all can collectively begin the process of saving humanity. In that effort, I highly recommend using the Universal Declaration of Human Rights as a moral base to offer a united thread of consciousness for all seeking human betterment. Humankind deserves nothing less.

What is an Anti-Agenda21 Activist? Fortune