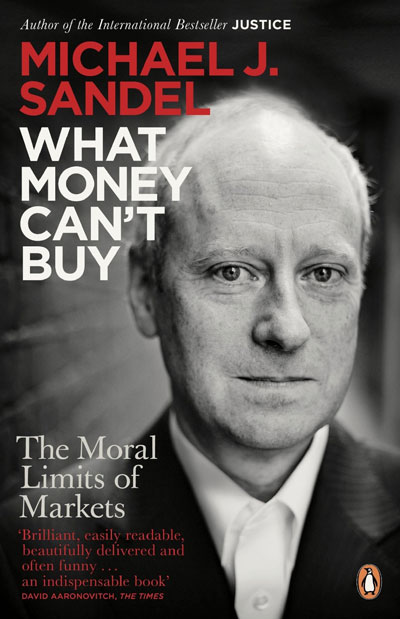 The popularity of Harvard philosopher Michael Sandel’s new book in China is a sign of the real hunger for public debate on the environmental and social costs of markets. “We live in a time when almost everything is up for sale”, argues Harvard philosopher Michael Sandel in his new book What Money Can’t Buy. In South Africa, ranchers can buy the right to kill an endangered black rhino for US$15,000. In Europe US$18 buys you the right to emit a metric tonne of carbon into the atmosphere. In India, US$6,250 will buy you the services of a surrogate mother.

These are just a few of the examples Sandel provides to emphasise his concern about the corrosive effect of markets – and market values – which have invaded every aspect of our social life. “We’ve drifted from having a market economy, to being a market society,” he writes.

Michael Sandel is a professor of politics at Harvard and his last book, Justice, was the subject of a famous lecture course. His message has struck a huge chord in Asia, where millions have bought his books and watched his online lectures. Sandel’s public lectures have packed out universities in China and stadiums in South Korea where he leads heated discussions with students on the principles of morality, virtue and justice.

Sandel spoke to chinadialogue about the relevance of his ideas for contemporary China and his vision of a global shared environmental ethic.

CD: Why did you decide to write this book?

MS: First I was aware of the increasing role that market thinking and market reasoning and values were playing in societies around the world. And I noticed that we weren’t really having a serious debate about the proper role of money and markets. The second thing that prompted me to write this is that we tend to shy away in public discourse from discussing controversial conceptions of the good life and of virtue. We shy away from asking ethical questions. We ask people to leave their morals and spiritual convictions at the door when they enter the public square. I’ve been arguing for some time that this is a mistake. It ill equips us to deliberate together what is the proper role of markets and the moral limits of markets.

CD: Are the moral limits of the market different in China than elsewhere?

MS: I think each society has to work this out for itself. But travelling around the world I do find a huge hunger for reflection on and discussion of the moral limits of the market. In China, on the one hand there has been an embrace of markets and of market mechanisms and the result has been an astounding level of economic growth. At the same time I find in China widespread recognition of the need to discuss values beyond GDP alone, including a concern with rising inequality and also a concern with social cohesion. I think there is also growing awareness in China that a very serious price has been paid in rising inequalities and a frayed sense of community and cohesion by the marketisation of social life.

CD: How have markets changed the way we value the environment and our natural resources?

MS: Colleagues and experts I’ve met in China have told me that the remarkable economic growth that China has achieved has come at the cost of rising inequality and serious environmental challenges and this seems to be one of the reasons that Chinese experts and academic colleagues believe that it is important to consider not only the moral limits of markets but also the environmental costs of unfettered market capitalism.

Some attempts have been made to use market mechanisms to help alleviate carbon emissions and global warming and I think to some extent market mechanisms can help. For example, it is a great mistake not to find a way to put a price on the emissions that companies make in the course of producing goods. So I am very sympathetic to a straightforward carbon tax. Where I have been critical of the use of market mechanisms is when for the purposes of international global agreements between countries the US has insisted on using tradable pollution permits as part of the scheme. I think it is important that there be a sense of shared sacrifice and shared responsibility. I think we need to cultivate a global ethic that encourages the countries of the world to recognise a shared responsibility for the future of the planet. If emissions trading schemes permit rich countries to buy their way out of shared sacrifice that can be damaging to the project of building this shared global ethic.

CD: What about building environmental awareness within countries?

MS: In many countries around the world the push for a greater environmental awareness has come from committed groups within civil society who try to make progress and bring to people’s attention the importance of reducing carbon emissions and avoiding environmental degradation. So I think that groups such as these have an important role to play in encouraging their governments to take serious action on the environment.

CD: Where can we find alternative ethics?

There are many sources of new alternative ethnical traditions to unfettered free market individualism and so I am interested in exploring the range of alternatives. In What Money Can’t Buy I argue for a tradition that goes all the way back to Aristotle that emphasises virtue, character formation and citizenship as an alternative source to market driven understandings of freedom and social life. But it could well be that the Chinese philosophical tradition also provides resources for an alternative picture and so I am keen to continue to explore this too.

Waking the Green Tiger: the rise of China’s green movement

CD: Many economists disagree with your arguments. What would you say to your critics?

MS: I would ask them, as I do in my lectures, to consider some cases. When I’ve been in China I asked audiences for example, after a natural disaster – say an earthquake and a hurricane – is there anything morally wrong with local shops increasing the price of supplies – batteries, food, flashlight, bottled water – and people said it was alright. But when I asked them whether it is fair that at Chinese New Year ticket scalpers [people who resell tickets for profits] push up the price of the train tickets, then the majority of people think it is objectionable. It is the same price system, it is the same principles of supply and demand and yet what the discussion shows is that the purely economic considerations about supply and demand do not resolve every question. That is how I would try to respond to very strong laissez faire market economists who would like to think that market reasoning and market values can in principle govern every aspect of social life.

CD: What is the future for online education?

MS: I think it has great potential to address inequalities in access [to education]. The main reason we put my Harvard Justice course online was to experiment with the educational uses of new technology and to see what would happen if we provided free and global access to a Harvard classroom. And for me the goal of the experiment was to give expression to the idea that higher education should be a public good not a private privilege. Now I don’t claim for a moment that an online course can provide all the things that in person teaching and learning can provide but I do think it can contribute to open access.

One of the most gratifying anecdotes I heard about the effects of this [open access] was from a colleague of mine who was recently travelling in China. He got into a taxi cab and it somehow came up that he teaches at Harvard. The taxi driver told him that he was taking an online course on justice and so was everyone in his family. That for me makes the whole project worthwhile.

I would like to take this experiment one step further and create a global classroom discussion where students in different parts of the world can come together to debate some of these questions. Last semester in my Harvard Justice course with the help of a tech start up company we were able to put a live real time video link connecting students in Shanghai, New Dehli, Sao Paulo, Brazil and Tokyo with my Harvard class – and so we were able to discuss philosophical questions across five countries at once.